121. The Bushbuck and the Rabbit

“I know Leopard is dangerous,” said Bushbuck, “but I’ve never seen him.”
“I can fix that,” Rabbit offered.
He led Bushbuck to a tree by the river. “Wait up in the tree,” Rabbit said.
Then Rabbit went to Leopard. “Bushbuck is bathing in the river,” he said. “Follow me!”
“There he is!” Rabbit whispered to Leopard, pointing at Bushbuck’s reflection.
Leopard jumped in.
No Bushbuck.
Rabbit pointed. “He’s right there!”
Leopard again plunged into the water.
Nothing.
“You wasted my time, Rabbit!” Leopard said angrily as he left.
Bushbuck came down and thanked Rabbit: he had seen Leopard and survived!
[a Lala story from Zambia]
Inspired by: "The Bushbuck and the Leopard" in Lala-Lamba Handbook by A. C. Madan, 1908.
Notes: You can read the original story online. The Lala language version is also available; the rabbit is Kalulu. 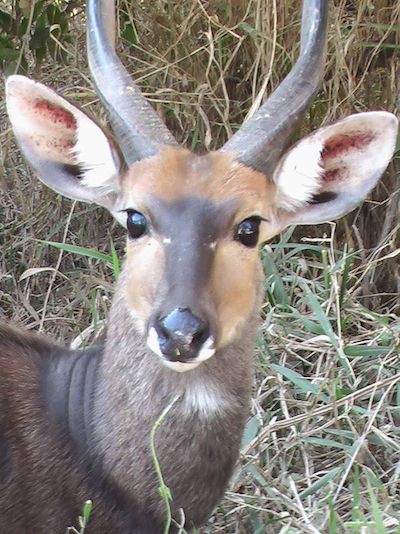