Leopard and Hawk were friends.
One day Leopard visited Hawk.
"I'll get us something to eat," said Hawk. Having soared to the highest treetop, Hawk swooped down, grabbed a stray chicken, and killed it.
Leopard was very impressed. Hawk didn't waste any time stalking; he just swooped — kpwing! — and grabbed.
Another day Hawk visited Leopard. "I'll get us something to eat," said Leopard. He climbed the highest tree and swooped — kpwing! — but he hit the ground so hard that all his bones were broken, and he died.
Hence the proverb: Do only what you can do.
[a Bulu story from Cameroon]
Inspired by: "Do the Things You Can Do" in Bulu Folk-Tales (in Journal of American Folklore) by George Schwab, 1919. The Bulu are a people who live in Cameroon.
Notes: You can read the original story online. In the original story it mentions leopard's wives coming to mourn over his dead body. 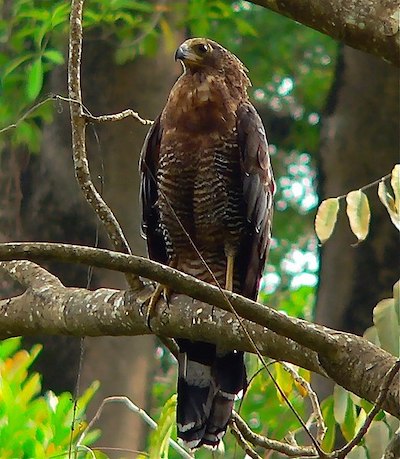