There was once a snake who swallowed a frog.
As he disappeared inside the snake, the frog shouted, "You're the ugliest creature I've ever seen! What happened to your feet? Why do your eyes stick out? And why are you speckled all over?"
"I wore my feet down chasing frogs!" replied the snake. "My eyes stick out from watching for frogs, my skin is speckled because I have eaten so many speckled frogs, and now I'm going to eat you!"
"Curse you!" shouted the frog. "Curse you and your children and your grandchildren and..."
Those were the frog's final words.
[a story from Madagascar]
Inspired by: "The serpent and the frog" in Oratory, Songs, Legends, and Folktales of the Malagasy (published in Folklore) by James Sibree, Jr., 1883.
Notes: You can read the original story online. The story says the serpent is called "manditra," which is a species of boa. 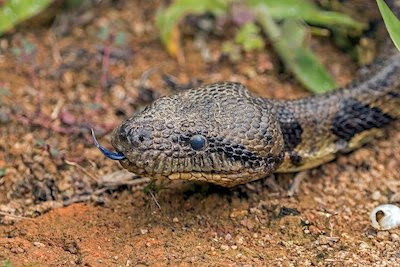