90. The Leopard and the Cheetah

Leopard killed the chief's ox and then smeared the ox's blood on the mouth of his brother, Cheetah, while Cheetah was sleeping.
"One of my oxen is missing!" shouted the chief.
"I haven't seen your ox," said Leopard.
"I haven't seen it either," said Cheetah.
"But you have blood on your mouth, brother," said Leopard. "Look, chief, there is the blood!"
The chief then ordered Leopard to punish Cheetah, so Leopard attacked Cheetah fiercely.
"You will always be fierce, Leopard," said the chief, "and you, Cheetah, will always be guilty of biting cattle, for which you will forever be punished."
[an Ila story from Zambia]
Inspired by: "Why Leopard and Cheetah Became Distinct" in The Ila-Speaking Peoples Of Northern Rhodesia, Volume 2 by Edwin Smith and Andrew Murray Dale, 1920.
Notes: You can read the original story online. 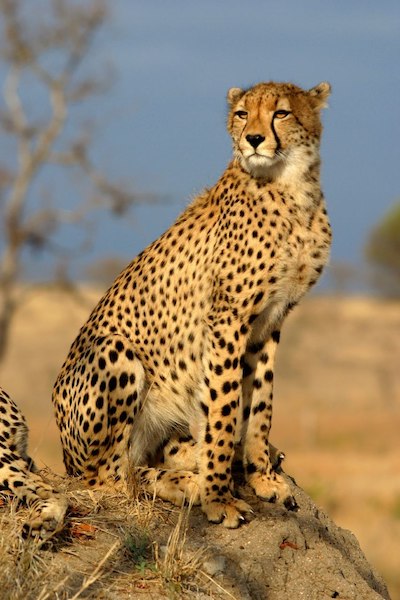