Lion used to be able to fly; his power came from the bones of his victims.
He appointed Crow to guard those bones. “Let no one break these bones!” he commanded.
But Frog came and smashed the bones. “I’m not afraid,” he told Crow. “Tell Lion I did this!”
When Lion realized he could no longer fly, he ran back home.
Crow squawked, “Frog came and broke the bones.”
Lion tried to grab Frog, but each time, Frog hopped farther away.
Now Lion cannot fly, and he punished Crow for failing to guard the bones: nobody understands Crow’s words anymore.
[a Khoekhoe story from Namibia]
Inspired by: "The Flying Lion" in Reynard the fox in South Africa; or, Hottentot fables and tales by W. Bleek, 1864.
Notes: You can read the original story online. This is another of the Nama stories that Bleek found in Kroenlein's manuscript. The crow in this story is the "white crow" or pied crow, which you can see here: 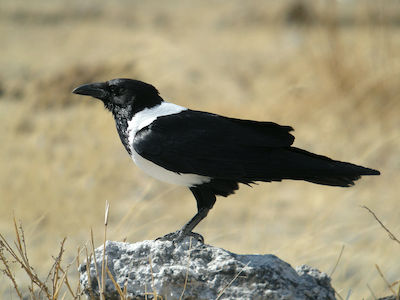