Squirrel and Viper were such good friends that one day Viper said to Squirrel, "We should live together in a single nest!"
Squirrel hesitated. "I'm not sure that's a good idea," she said. "If we're sharing the same nest, you might harm me. You are a Viper after all."
"I would never harm you!" Viper protested.
So Squirrel and Viper lived together.
Later on, Squirrel gave birth.
Then, when she went looking for food. Viper ate all of Squirrel's children.
Now when you hear Squirrel cry, she is saying, "Is Viper really my friend? Really my friend? Really my friend?
Inspired by: "The Little Squirrel and the Viper" in Bulu Tales from Kamerun, West Africa (published in Journal of American Folkklore) by Adolph N. Krug, 1912.
Notes: You can read the original story online. 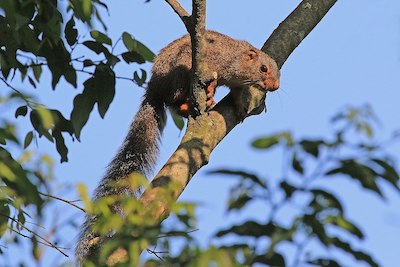