134. The Elephant and the Turaco Bird

Turaco and Elephant argued about who was richer, shouting at one another.
"I'm richer!"
"No, I'm richer!"
Their wives heard them shouting
Turaco's wives knew his loud voice meant lovemaking, so they prepared a great feast for their lover.
Elephant's wives knew his loud voice meant anger, so they ran away into the forest.
Then Elephant and Turaco went to Turaco's house. "Look at this feast!" said Turaco. Elephant had to admit: Turaco was very rich.
Then they went to Elephant's house. It was deserted. There was no feast.
Elephant was embarrassed.
"See?" said Turaco. "I am richer than you!"
[a Bulu story from Cameroon]
Inspired by: "Mba Touraco Shows That He Is Richer Than Elephant" in Bulu Folk-Tales (in Journal of American Folklore) by George Schwab, 1914. The Bulu are a people who live in Cameroon.
Notes: You can read the original story online. The author notes: "When the male Mba calls his mate, he calls very loudly. When a bull-elephant trumpets loudly, it is a danger-signal to the rest of the herd." 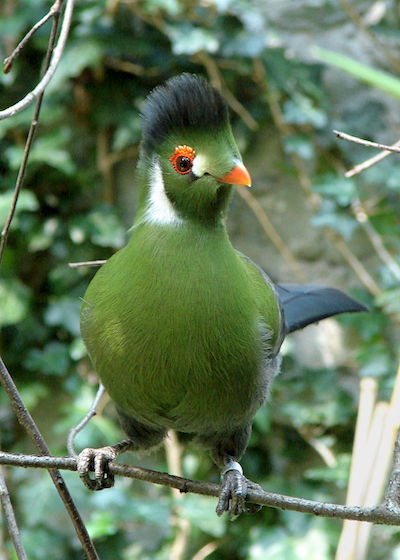