7. The Mother of the Snakes

After Mother-Snake gave birth to all the Snakes, she told them, "Listen for when I call you to come get your poison."
Later, Mother-Snake called her children and gave them their poisons. Puff-Adder came, and Bush-Viper; Spitting-Cobra came, and so did Black-Mamba and Green-Mamba.
Water-Snake, however, had gone fishing. He didn't come when his mother called.
"Where's my poison?" Water-Snake asked when he finally returned home.
"I called, but you didn't come," Mother-Snake said. "Because you were disobedient, you have lost your poison. Now the people will just laugh when you bite them because your bite can do no harm."
[a Loki story from the Congo]
Inspired by: " Why the Water-Snake Has no Poison" in Among Congo Cannibals by John Weeks, 1913.
Notes: You can read the original story online. The original story refers to the mother as a "python," which is not venomous, so I just said "Mother-Snake" instead. There are many types of poisonous snake sin the Congo, and it's a serious medical problem today. The African brown water-snake is non-poisonous: 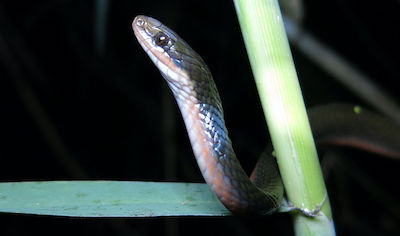