186. The Crocodile and the Two Children

Crocodile saw two children bathing. He grabbed one, dragging him to his hole in the riverbank. “Stay here,” Crocodile said, “while I go get the other one.”
After Crocodile swam off, the child escaped and ran to the village.
When Crocodile returned to the bathing place, the other child had run away, and people on the riverbank were shooting at him.
He swam back to his hole; that child was gone too.
Enraged, Crocodile crawled onto the land and went into the village. He stalked the people in the village for three days before he finally returned to the water.
[a Benga story from Gabon]
Inspired by: "Crocodile" in Where animals talk: west African folk lore tales by Robert H. Nassau, 1912.
Notes: You can read the original story online. This is a Benga story, and the crocodile's name is Ngando. 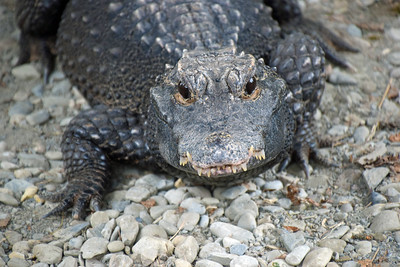