Little Leopard and Little Otter were best friends.
Then each went to his father's village for a visit.
When Leopard learned his son's friend was Little Otter, he said, "Otters are not our friends. Catch him, bring him here, and I'll show you how to kill him."
Meanwhile, Otter warned his son, "Play with Little Leopard only on the riverbank very near the water."
When the two friends met again, Little Otter said, "My father warned me about you."
Little Leopard said, "I talked to my father too!"
Then he pounced, but Little Otter jumped into the river and escaped.
Inspired by: "How Knowledge Spoils Friendship" in Bulu Folk-Tales (in Journal of American Folklore) by George Schwab, 1919. The Bulu are a people who live in Cameroon.
Notes: You can read the original story online. Compare the Ekoi story of Little Frog and Little Snake. 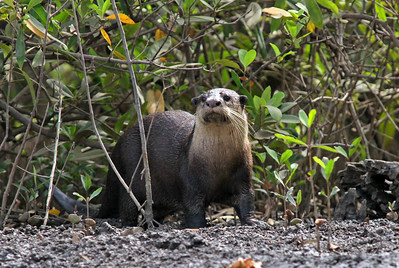