A little boy, just five years old, wandered off alone.
His people searched but couldn’t find him.
A year later, someone saw baboon spoor together with a child’s footprints.
The people followed the tracks and found the boy sitting on a rock with a troop of baboons. The baboons ran, carrying the boy away, but the people followed, and the baboons finally relinquished the boy.
The boy wanted to go with the baboons, but after a while he resumed his human life. “They were kind,” he said, “feeding me special treats and always letting me be the first to drink.”
[a Khoekhoe story from Namibia]
Inspired by: "The Lost Child" in Reynard the fox in South Africa; or, Hottentot fables and tales by W. H. I. Bleek, 1864.
Notes: You can read the original story online. This is one of the stories that Bleek included from Sir James E. Alexander's " Expedition of Discovery into the Interior of Africa." 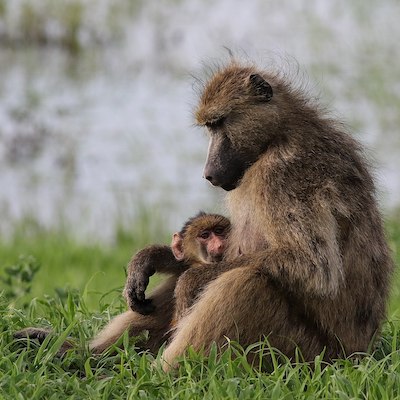