82. The Rooster and the Swallow

Rooster sent word to his friend, Swallow, “Please come, friend! I’ve received bad news.”
When Swallow came, Rooster’s wife said, “Rooster received bad news and has cut off his head.” But Rooster had only tucked his head under his wing.
“My condolences!” Swallow said.
Later, Swallow got some bad news. “Call Rooster,” he told his wife. “Meanwhile, I too will cut off my head.”
Rooster found Swallow with his head cut off. “I’ll come back tomorrow to see if he’s better,” Rooster said. He came back the next day, and the next, but Swallow didn’t get better. Swallow was dead.
[a Chewa story from Malawi]
Inspired by: "The Cock and the Swallow" in Some Folk-lore Stories and Songs in Chinyanja by R. S. Rattray, 1907.
Notes: You can read the original story online, and you can learn about Nyanja, or Chewa, language at Wikipedia. A relative of the swallow takes revenge in the second part of the story: Rooster, Swallow, and the Pumpkin Stew. 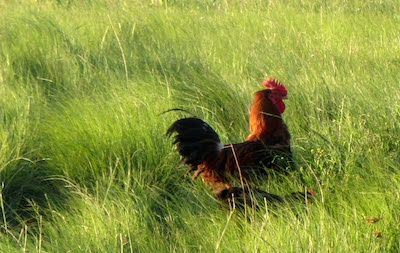