19. The Hippo who Imitated the Hen

Hen tucked one leg beneath her wing and squawked, "I sold my leg at the market for a sack of gold."
Hippo thought to himself, "My leg is far bigger, so it will be worth even more."
Then he told his friends Hawk and Kite, "Let's go to the market together."
But when Hippo cut off his leg to sell, he bled to death.
Hawk and Kite then flew back to the village. "With your trickery, you killed our friend Hippo!" they shouted at Hen, and to this day hawks and kites are enemies of the hen and her family.
[a Loki story from the Congo]
Inspired by: "The Fowl and the Hippopotamus" in Among Congo Cannibals by John Weeks, 1913.
Notes: You can read the original story online. In the original, the fowl sold its leg for "two thousand brass rods" as a form of currency; you can see a bundle of brass rods here. The original story adds at the end a bit about crocodiles and humans: "Fowls called on the Crocodiles to bite the Hippopotami and wound them to death; and they asked Man whenever he saw a Hippopotamus to hurl his spear at it and kill it. Thus, through the Fowl's one deception, enmity, quarrels, and death were first introduced among the birds and animals." 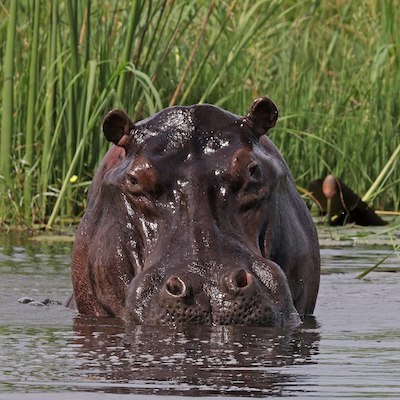