The animals made Ostrich their king because of his mighty wings. Even Lion was afraid when Ostrich flapped his wings.
When Lion and Ostrich hunted together, Ostrich flapped his wings to drive the animals towards Lion, who killed them. Then Ostrich would take only the soft parts and the blood for himself, telling Lion, "Go ahead! You may eat the bones and meat."
One day Lion saw Ostrich asleep, his mouth wide open.
Lion looked inside.
Ostrich had no teeth!
"O King," roared Lion, "you have no teeth!" Then Lion attacked, tearing Ostrich to pieces with his teeth and claws.
[a San story from southern Africa]

Inspired by: "Ostrich, King of the Animals" in The Tati Bushmen (Masarwas) and their Language (in Royal Anthropological Institute of Great Britain and Ireland) by S. S. Dornan, 1917.
Notes: You can read the original story online. I add the part at the end about the lion killing the ostrich based on this version: The Lioness and the Ostrich. 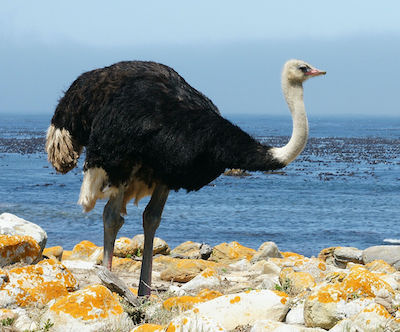 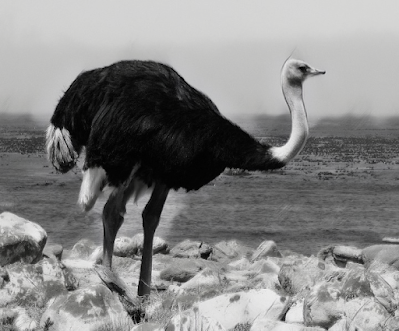