59. The Tortoise, the Buffalo, and the Elephant

"I challenge you to tug-of-war!" Tortoise said to Buffalo, and Buffalo accepted the challenge.
Tortoise said the same to Elephant, who also accepted.
The rope was so long Buffalo and Elephant didn't realize they were pulling against each other, not against Tortoise. Buffalo and Elephant pulled so hard they died!
Tortoise rejoiced, thinking about all the meat he would get. "I'll butcher Elephant first," he decided, and he set to work.
Then the wind blew through the trees.
"Someone's coming to steal my meat!" shouted Tortoise, and in his fearful frenzy, he fell on his own knife and killed himself.
[an Igbo story from Nigeria]
Inspired by: "A Tortoise and a Buffalo" in Among the Ibos of Nigeria by George T. Basden, 1921.
Notes: You can read the original story online. The "tug-of-war" is a popular story type, but this is the first version I've read with the trickster doing himself in at the conclusion! 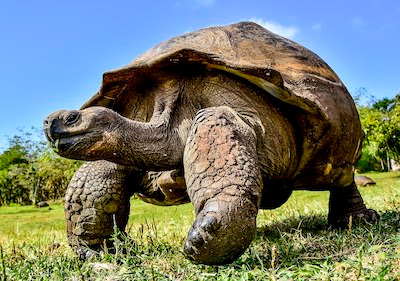