157. The Lioness and the Antelope

Once there was a lioness who gave birth to a cub.
Then, after giving birth, she was hungry. Seven days passed, and she had not eaten.
“I must go hunt. I must get food,” she thought, “or my cub and I will die.”
She saw an antelope grazing and crept up on him, slowly, quietly.
Then the antelope realized the lioness was there. He turned his head and stared right at her. “Welcome, cousin!” said the antelope.
The lioness was ashamed and did not attack the antelope. She could not attack someone who was her cousin.
So the antelope survived.
[a Swahili story from Zanzibar]
Inspired by: "The Lioness and the Antelope" in Swahili Tales by Edward Steere, 1870.
Notes: You can read the original story online. The book also contains the Swahili text. 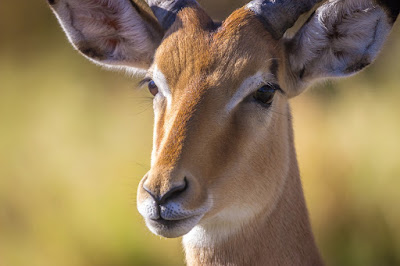