44. The People Who Wanted to Live Forever

Long ago, in the time of the first animals and the first people, there was a man who spoke for the people. “We want to live forever,” the man announced.
The hyena heard him and said, “No! It cannot be this way. You cannot live forever.”
“Why do you say that?” the man asked.
“You cannot live forever,” explained the hyena, “because we want to eat your dead bodies.”
This is the reason why people must die. People want to live forever, but they die so that the hyenas can eat their dead bodies.
This is the origin of death.
[a Gogo story from Tanzania]
Inspired by: "The Origin of Death" in Notes on the Wagogo of German East Africa, published in The Journal of the Anthropological Institute of Great Britain and Ireland, by H Cole, 1902.
Notes: You can read the original story online. You can read more about the Gogo people of Tanzania at Wikipedia. 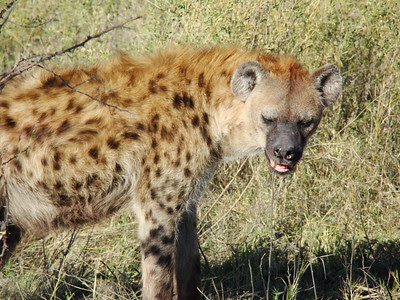