King Lion was ill and unable to hunt.
The animals visited the Lion’s den one by one, but not Jackal; he saw their tracks going in but not coming out.
Then Hyena denounced Jackal. “Jackal is disrespecting you,” she said.
“Bring Jackal here,” Lion growled.
Hyena dragged Jackal into the Lion’s den, and Jackal yelped, “O King, I have visited all the doctors to find a cure for your illness.”
“Tell me!” roared Lion.
“You must wrap yourself in the skin of a freshly killed Hyena.”
Lion immediately grabbed Hyena and pulled her skin off. Jackal, meanwhile, made his escape.
[a Khoekhoe story from Namibia]
Inspired by: "The Lion's Illness" in Reynard the fox in South Africa; or, Hottentot fables and tales by W. Bleek, 1864.
Notes: You can read the original story online. This is a story told in the Khoekhoe language, collected by Johann Georg Krönlein, and first published in 1864. It shares elements with two famous Aesop's fables; I'm increasingly persuaded that parallels like this are the result of African elements working their way into the ancient Aesop's fables rather than the reverse. 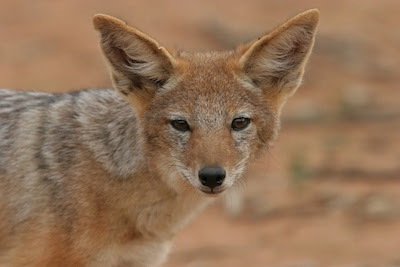