Elephant raided Rabbit’s garden, eating the biggest pumpkin.
“Who ate my big pumpkin?!” Rabbit shouted.
Elephant said nothing.
Rabbit took his drum and hid inside the biggest pumpkin left in the garden.
Elephant returned and ate that pumpkin.
Then, inside Elephant’s stomach, Rabbit beat his drum. “I caught you, thief! Caught you! Caught! YOU!”
Rabbit kept drumming inside Elephant until he died.
The people were surprised to see the dead Elephant. They cut him open and found the pumpkin; they cut the pumpkin open, and Rabbit jumped out and ran away, laughing.
“That must be why Elephant died!” they said.
[a Yao story from Malawi]
Inspired by: "The Roasted Seeds" in Africana by Duff Macdonald, 1882.
Notes: You can read the original story online. This is a legend of the Yao people of Malawi. Elephant is eating Rabbit's pumpkins as revenge; see the previous story: Elephant and Rabbit Plant Pumpkins. 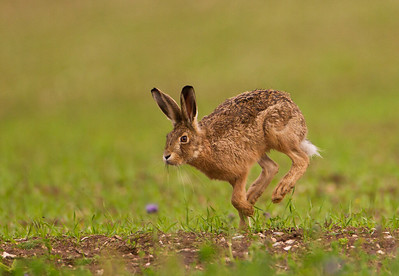