Lion and Crocodile were boasting.
"I'm stronger than you!" roared Lion.
"No, I'm stronger than you!" protested Crocodile. "I can kill Hippopotamus in the water."
"But I can kill Buffalo on the land," retorted Lion.
To prove it, Lion stalked Buffalo by the riverbank. As Lion pounced and then dragged Buffalo down, Crocodile came out onto the land, grabbed Buffalo by a hind leg, and pulled. Crocodile pulled Buffalo into the water, and he pulled Lion into the water too. Then Crocodile drowned both Lion and Buffalo and ate them.
After that, Crocodile was even more confident in his strength.
Inspired by: "The Lion and the Crocodile" in The Baganda by John Roscoe, 1911.
Notes: You can read the original story online. For more about the Baganda people, see Wikipedia. There is a continuation of the story here: The Lion's Revenge. 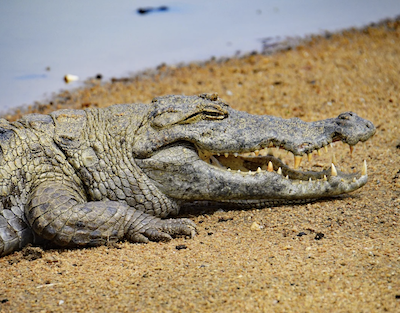