113. The Rabbit and the Leopard

Rabbit took a basket to go harvest pumpkins.
“Where are you going?” Leopard asked.
“To harvest pumpkins,” Rabbit replied.
“You’ll never be able to carry a basket full of pumpkins,” Leopard said.
“I’m strong!” said Rabbit. “I could carry YOU in this basket.”
Leopard laughed.
“Just get in the basket,” said Rabbit. “I’ll show you.”
Leopard got in the basket, and Rabbit strapped the basket shut so Leopard couldn’t get out.
Then Rabbit took his hatchet and chopped Leopard into bits.
“No need for pumpkins,” Rabbit said. “I’ll have meat for dinner.”
That meat lasted Rabbit a good long time.
[an Ambundu story from Angola]
Inspired by: "Hare and Leopard" in Folktales of Angola by Heli Chatelain, 1894.
Notes: You can read the original story online, and the Kimbundu text is also available. The hare is Kabulu and the leopard is Ngo. 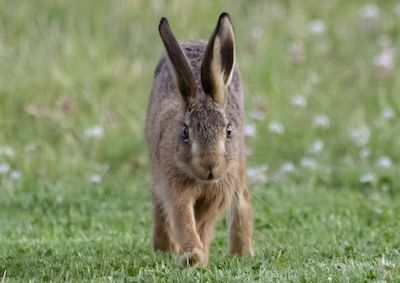