89. The Leopard and the Pangolin

Leopard and Pangolin vowed to feed one another in turn.
First, Leopard killed a deer and fed Pangolin.
"Now you must feed me," said Leopard. "Kill me a pig!"
"Alright," said Pangolin.
First, he said to Mr. Pig privately. "I often hear your wife uttering curses against you."
Next, he said to Mrs. Pig privately, "I often hear your husband uttering curses against you."
The two Pigs fought fiercely and killed one another.
Then Pangolin took one dead pig to eat for himself, and he gave the other to Leopard.
Husbands and wives should not believe the gossip of strangers!
[a Bulu story from Cameroon]
Inspired by: "The Young Pangolin and the Pig Family" in Bulu Folk-Tales (in Journal of American Folklore) by George Schwab, 1914. The Bulu are a people who live in Cameroon.
Notes: You can read the original story online. 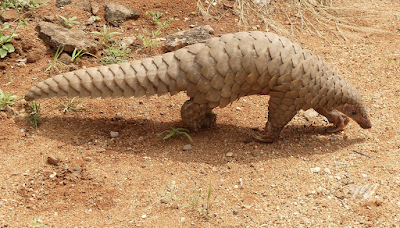