The King’s drum produced unlimited food and drink: it was magic!
Only the King knew the drum’s secret: if the drum’s owner ever stepped over a stick, warriors would emerge from the drum and attack whoever they saw.
Tortoise wanted the King’s drum, so he climbed a palm-tree and waited. When the King walked by, Tortoise dropped a palm-nut.
The King picked it up.
“Thief! You stole my food!” Tortoise shouted. “You must pay!”
“Take whatever you want,” said the King kindly.
“Give me the drum!” said Tortoise.
Smiling, the King agreed, but he didn’t tell Tortoise the drum’s secret.
[a story from southern Nigeria]
Inspired by: Folk Stories From Southern Nigeria by Elphinstone Dayrell (online).
Notes: This is the first part of the story called "The King's Magic Drum." The story starts by explaining how the king uses this magic drum to keep the peace: whenever his enemies showed up, the king would use the drum to summon a huge feast, and instead of fighting, he would feed his enemy, and they would leave happy. The king is a very sympathetic character in this story (not always the case with kings in folktales!). In the original story, it was the princess who picked the palm-nut up and then Tortoise petitioned the king, but to keep the story short, I went straight to the king. To find out what happens next, see Tortoise is Rich. 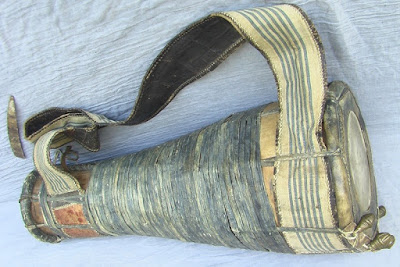