99. The Mouse-Deer and the Python

Mouse-Deer was wandering in the woods when he carelessly walked near Python's lair, and Python grabbed him.
"You're barely a sssssssssssnack!" he hissed. "But better than nothing."
Just as Python started to swallow Mouse-Deer, Monkey appeared, and Mouse-Deer shouted, "Help me, Monkey!"
"What's going on here, Python?" said Monkey. "What gives you the right to eat my friend?"
"Mmm..nnnnh...mwmwmw..." Python said; it was hard to speak with Mouse-Deer already in his mouth.
"I can't understand you with your mouth full," Monkey told Python, so Python spit Mouse-Deer out, and before he could say a word, both Mouse-Deer and Monkey escaped.
[a Bakweri story from Cameroon]
Inspired by: "How the Monkey Saved the Antelope from Death" in African Jungle Tales by C. J. Bender, 1919.
Notes: You can read the original story online. This is a story of the Kwe (Wakweli) people of Cameroon; find out more at Wikipedia. In the original story, Monkey accuses Python of "talking like an old woman" which doesn't really resonate, so I had him tell Python not to talk with his mouth full.
I am really torn about what to call the very tiny antelope who is such an important character in African folktales; I've settled on "mouse-deer" since that immediately conveys the idea that this is a very tiny animal, and it also resonates with the way the tiny antelope of southeast Asia is usually referred to as "mouse-deer" in English, also a trickster character! Wikipedia labels the article: Chevrotain. 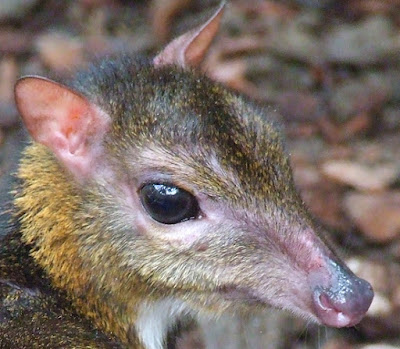 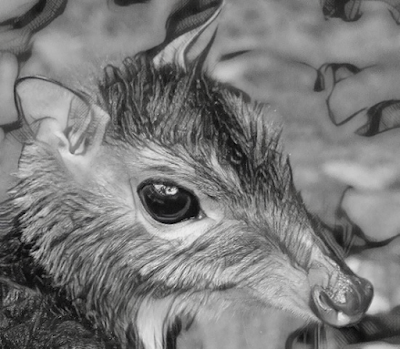