Wildcat summoned all the animals who hated Monkey because of the tricks he played on them. “Go announce that I am dead,” she told them, “and that you are arranging my funeral. Make sure you invite Monkey to the funeral feast.”
Before the funeral guests arrived, Wildcat lay down and pretended to be dead.
All the animals danced the funeral dance around her body, including Monkey.
Wildcat is dead, dead, dead… they sang as they danced.
Then Wildcat sprang up, reaching for Monkey.
But Monkey had already leaped high into a tree.
Ever since then, Monkeys have lived in trees.
[an Ewe story from Ghana]
Inspired by: "Why Monkeys Live in Trees" in The Eʻwe-speaking peoples of the Slave Coast of West Africa by Alfred Ellis, 1890.
Notes: This is a continuation of: Monkey Does Wildcat a Favor. 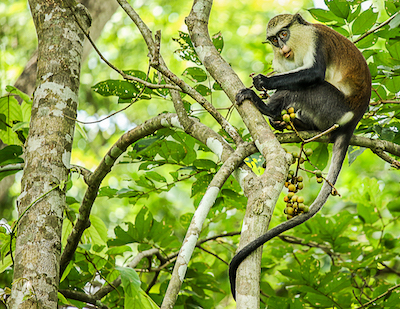