When he saw Ram for the first time, Leopard asked, "Who are you?"
Ram shouted, "I AM RAM! Who are you?"
"Uh.... I'm..." Then Leopard ran away, afraid even to say his name.
Jackal saw Leopard running and asked, "What happened?"
"I met a loud creature with enormous horns!" said Leopard. "His name is Ram."
Jackal laughed. "Fear not! Ram is actually good to eat. Let's go; I'll show you."
"I'm too frightened," said Leopard.
"Let's tie our tails together," Jackal said. "That will stop you from running away."
So, tails tied together, Jackal and Leopard went to see Ram.
[a Khoekhoe story from Namibia]
Inspired by: "The Leopard and the Ram" in Reynard the fox in South Africa; or, Hottentot fables and tales by W. Bleek, 1864.
Notes: You can read the original story online. Bleek notes that his source was From Sir James E. Alexander's "Expedition of Discovery into the Interior of Africa." This is part 1 of the story; see the continuation: The Jackal, the Leopard, and the Ram. 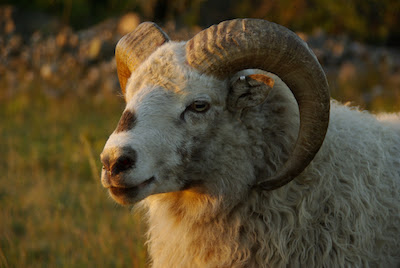