158. The Crocodile and the Hen

Hen was walking by the riverbank when Crocodile grabbed her. “Oh, my brother,” she squawked, “don’t do that!”
Crocodile was so surprised by her words that he let her go.
The next day, he caught Hen again, and again she said to him, “Let me go, my brother!”
Crocodile was confused. “She lives on land; I live in water. How can I be her brother?”
He asked his wise friend Lizard to explain.
“Don’t you understand?” said Lizard. “Crocodiles lay eggs, lizards lay eggs, so do hens. That makes us a family.”
For this reason crocodiles do not eat hens.
[a Bakongo story from Zaire]
Inspired by: "Why The Crocodile Does Not Eat The Hen" in Notes on the Folklore of the Fjort by R. E. Dennett, 1898.
Notes: You can read the original story online. These are Bakongo stories from French Congo / Zaire. In the original story, the crocodile is going to ask Nzambi (more about the Congo deities called Nzambi) about this when he runs into the lizard, who is called Mbambi. The lizard warns him not to ask God about this because it will just make the crocodile appear to be foolish. 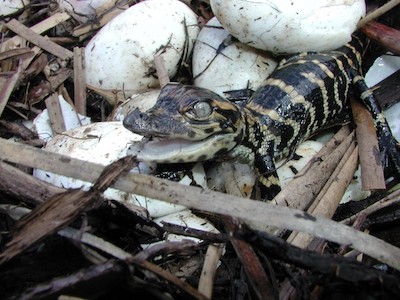