38. When Rabbit and Baboon Were Friends

Rabbit convinced Baboon that they should kill their mothers. "It'll be fun!" Rabbit said.
"I'm not sure," Baboon said.
"Don't worry," Rabbit reassured him. "I'll go first!"
Then Rabbit went behind his house, hit a barrel loudly with a stick, all the while screaming like his mother. His mother watched her son, smiling.
"Okay!" shouted Baboon. "I'll kill my mother now," and so Baboon killed his mother.
Then Baboon sat and cried; there was no one to cook dinner for him now. He was sorry his mother was dead.
Meanwhile Rabbit and his mother both laughed at the foolish Baboon.
[a Ndau story from Mozambique]
Inspired by: "The Hare and the Baboon" in Songs and tales from the dark continent
Notes by Natalie Curtis Burlin.
Notes: You can read the original story online. The hare is named Shu'lo and Zinhe'de is the baboon in this Ndau story from Mozambique. 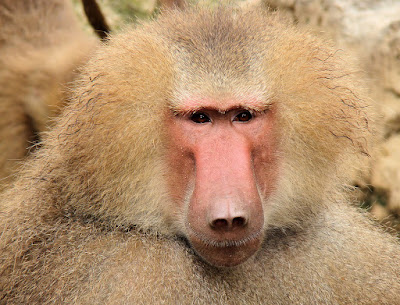