Some frogs lived together in a pond. It wasn’t warm, but it wasn’t cold either, and they lived happily there.
There was one frog, though, who wanted to find warmer water. He hopped near the kitchen fire, and then he hopped into a pot over the fire. The water was boiling hot!
“My fellow frogs,” he shouted, “you need to know: water is more than one kind.” Those were his last words.
“More than one,” croaked the frogs, “more than one!”
When you hear frogs croaking, that’s what they are saying: “Water is more than one kind! More than one!”
[a story from Liberia]
Inspired by: "The Frog" in Missionary Story Sketches: Folklore from Africa by Alexander Priestley Camphor, 1909.
Notes: You can read the original story online. About the meaning of this parable, Camphor comments: "The wealthy heir thinks there is nothing but happiness and prosperity in life; but when suddenly overtaken by adversity he and his friends are taught the useful lesson that life is checkered." For more about Camphor and his work in Liberia, see the note to this story: The Elephant and "Big America." 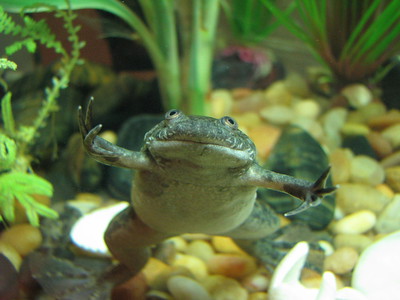