133. The Elephant who Wrestled the Animals

Elephant boasted that he was the best in wrestling. "No animal can throw me!" he proclaimed.
Many animals tried: Rhino, Hippo, Lion, Leopard... none of them was strong enough to throw Elephant.
"I'll try!" squeaked Bat.
Everyone laughed, especially Elephant. "Go ahead and try!" he said.
Then Bat flew into Elephant's ear and started flapping his wings. The terrible noise made Elephant's head hurt. He thrashed and screamed. He reared up, and then he ran, and as he ran, he fell down.
"Bat won!' shouted the other animals. "He may be small, but Bat has thrown Elephant to the ground."
[a Bulu story from Cameroon]
Inspired by: "How Bat Threw Elephant in Wrestling" in Bulu Folk-Tales (in Journal of American Folklore) by George Schwab, 1914. The Bulu are a people who live in Cameroon.
Notes: You can read the original story online. 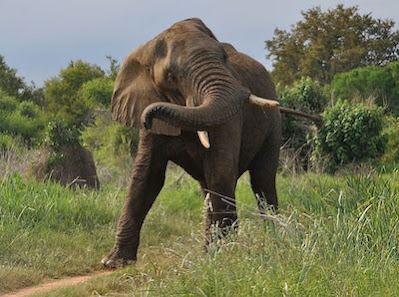