5. The Beaks of the Kestrel and the Hornbill

Kestrel used to have a very big beak, while Hornbill had only a small beak. In fact, Hornbill's beak was so tiny that he was embarrassed to be seen in public.
"Kestrel," he said, "loan me your big beak!"
Reluctantly, Kestrel agreed. "Just temporarily," he said. "I want my beak back!"
But Hornbill didn't return the beak. He liked how the other birds now admired him. "Suits me fine!" Hornbill cried. "Suits me fine!"
Meanwhile, Kestrel cried, "Tiny! Tiny! It's too tiny."
You can hear the birds crying those words even now; Hornbill says: Suits-me-fine, and the Kestrel protests: Tiny-tiny-it's-too-tiny.
[an Ila story from Zambia]
Inspired by: "Why Hornbill Has Such a Big Beak and Tom-Tit a Small One" in The Ila-Speaking Peoples Of Northern Rhodesia, Volume 2 by Edwin Smith and Andrew Murray Dale, 1920.
Notes: You can read the original story online. I am not sure if this "katiti" bird is the same one referred to in the story, but that seems to work better than "tomtit" as used in the story for the English name. The katiti is the smallest kestrel: 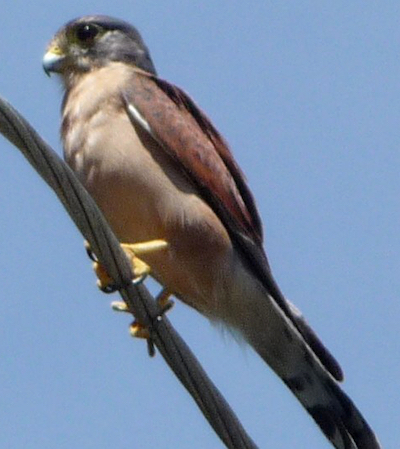