165. The Tree That Blocked the Sun

Long ago a tree grew so tall that it blocked the sun. It was night all the time; the sun could not shine.
Elephant tried to pull the tree down with his trunk; he failed.
Lion and Leopard used their claws and teeth. Other animals pulled and pushed, they butted with their horns, but nobody could bring the tree down.
Then Mongoose came. The animals laughed because the little creature was not strong.
But Mongoose had an axe! It was small but sharp, and he cut and cut until the tree fell.
That’s how Mongoose brought daylight to the world.
[a story from Liberia]
Inspired by: "Woore's Story" in Missionary Story Sketches: Folklore from Africa by Alexander Priestley Camphor, 1909.
Notes: You can read the original story online. The author explains that this is a story told by a Kroo storyteller in Liberia named Woore. The hero of the story is "nuh," a small animal like a ferret. I'm guessing it is a mongoose, but I could be wrong. If anyone has information about that, let me know! For another story about the "nuh" and more about Camphor's work in Liberia, see: The Elephant and "Big America." 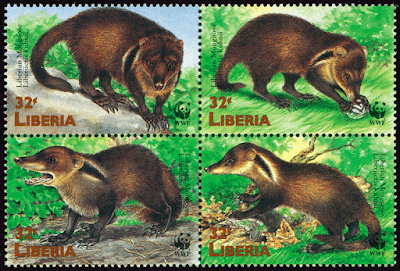