Long ago, a man married a crocodile; their children are our ancestors. The people called her “Grandmother Crocodile,” and they lived on land and water happily together.
But one day a man killed a baby crocodile and ate it.
Grandmother Crocodile wept and complained to the people, “Your grandchild has eaten my grandchild. We crocodiles will go live in the rivers now, and we will attack people whenever they get into the water.”
Then the people said, “We will make spears and kill you if we ever find you on the land.”
That is when crocodiles and people became enemies.
[a Shilluk story from the Sudan]

Inspired by: "Nyikang’s Parents" in The Shilluk people, their language and folklore  by Diedrich Westermann, 1912.
Notes: You can read the original story online. The book also contains the Shilluk text; you can find out more about the Shilluk people of South Sudan at Wikipedia. The story includes the names of the Shilluk ancestors, connecting this story up to other stories. It also adds some great details, like how people used to ride the crocodiles safely, and also how the people do allow the crocodiles on land in order to lay their eggs, but for no other purpose. 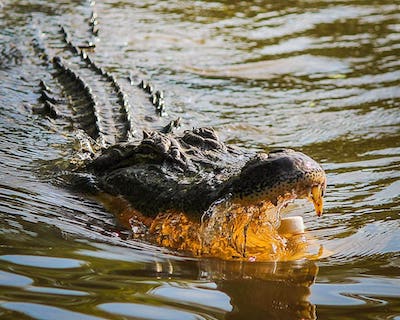