86. The Wildcat and the Gazelle

Wildcat and Gazelle were friends, vowing that if famine came, they would eat each other’s mothers.
Famine came.
They killed Wildcat’s mother and ate her, but Gazelle hid his own mother in a cave. “Hide until I call you,” he said.
Wildcat discovered Gazelle’s secret. He went to the cave and imitated Gazelle’s voice: “Come out, Mother!”
When Gazelle’s mother came out, Wildcat killed her and prepared a great feast, inviting Gazelle as guest of honor.
Gazelle later discovered his mother was missing and realized where the meat for the feast came from.
After that, Wildcat and Gazelle were enemies.
[a Bakongo story from Zaire]
Inspired by: "The Wild Cat And The Gazelle" in Notes on the Folklore of the Fjort by R. E. Dennett, 1898.
Notes: You can read the original story online. This is a Bakongo story from Zaire; The wildcat is named Nenpetro, and the gazells is Nsessi. In the original story, it is (strangely) Wildcat's son who is sent to take food to the mother Gazelle, which is how the Wildcat finds out about it; I left that part out. 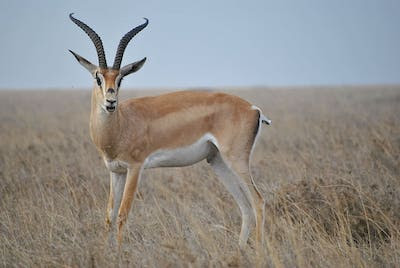