Hawk and even Eagle feared Rooster's crest of sharp red horns, so Eagle sent Hawk with a message of peace.
"King Eagle wants to be your friend," Hawk told Rooster, "but he fears your red horns."
Rooster laughed. "They're not horns. Come feel! They're just soft flesh."
Hawk touched the cockscomb. "Indeed!" he said. Then he grabbed one of Rooster's daughters and carried her off to Eagle.
"We need not fear the Rooster!" Hawk announced. "I even stole one of his daughters for you."
That is how Eagle and Hawk began to wage war on Rooster and all his kin.
[a Yao story from Malawi]
Inspired by: "The Hawk and the Cock" in The Wayao of Nyasaland by Hugh Stannus, 1917.
Notes: You can read the original story online. Katotola is the small hawk (black-shouldered kite), and Kapungu is the eagle (bateleur). Compare a similar story told about the fox and the rooster. 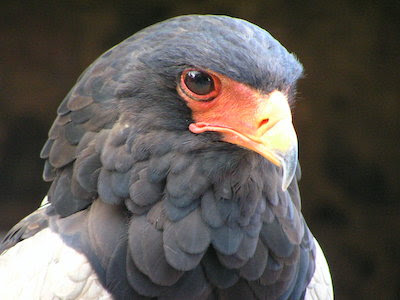