The Leopard and the Python

Leopard and Python were friends.
When Leopard's wife had a child, Leopard said, "Can you give me your skin to make a carrying-strap for the child?"
"Of course I can!" said Python, and he shed his skin so Leopard could make the carrying-strap.
When Python's wife had a child, Python said, "Now give me your skin for a carrying-strap! Or is your skin not strong enough?"
"Of course my skin is strong enough!" shouted Leopard. "Strip off my skin, cub!" he told his son, but when the cub stripped off Leopard's skin, Leopard died.
That's how Leopard's foolishness killed him.
Inspired by: "How Leopard's Foolishness Killed Him" in Bulu Folk-Tales (in Journal of American Folklore) by George Schwab, 1914. The Bulu are a people who live in Cameroon.
Notes: You can read the original story online. 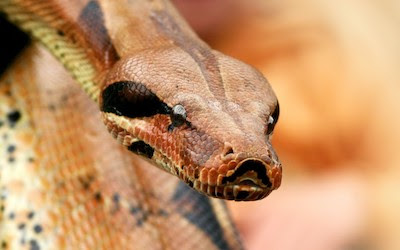