30. The Fish and the Leopard

Fish used to live on land, and he was friends with Leopard.
Then Fish fell in love with Leopard’s wife.
When Leopard caught them, he was furious, but Fish was his friend, so he didn’t kill him; instead, he took Fish to the King.
Fish offered no defense.
“Fish betrayed his friend, which makes his crime even worse,” said the King. “I decree that Fish will live forever in the water. He cannot live on the land. Moreover, people and animals will be free to catch and kill Fish in the water. That is Fish’s punishment for his bad behavior.”
[a story from southern Nigeria]
Inspired by: "The Fish and the Leopard's Wife; or, Why the Fish lives in the Water" in Folk stories from southern Nigeria, West Africa by Elphinstone Dayrell, 1910. The story is set in a time "many years ago, when King Eyo was ruler of Calabar."
Notes: You can read the original story online. 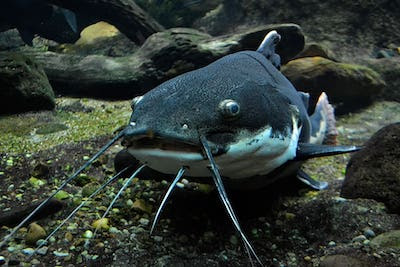