Wildcat and Rat were friends, and together they caught and killed an ox.
Then Wildcat took all the meat. "The bones are for you," she told Rat.
"You've got more meat than you can eat!" protested Rat.
"Well, take the skin too," Wildcat allowed, but she kept all the meat, dried it, and put it in a basket.
Rat nibbled the dried meat every day until it was gone.
When Wildcat found out, she chased Rat, who escaped into his hole.
"I curse all Rats," she shouted. "The whole Cat family will hunt them forever!"
That's why cats eat rats.
[a story from Madagascar]
Inspired by: "The Wildcat and the Rat"  in Oratory, Songs, Legends, and Folktales of the Malagasy (published in Folklore) by James Sibree, Jr., 1883.
Notes: You can read the original story online. The wildcat is presumably a Madagascar civet. 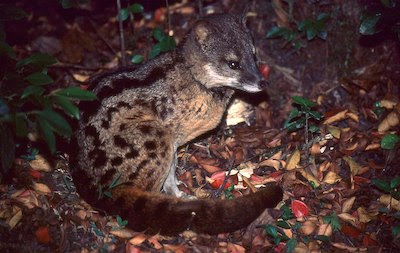