"Ant-hills are strong against fire," Rabbit told Lion.
"Show me!" said Lion.
"Pile wood around this ant-hill and set it on fire," said Rabbit.
Rabbit had built a burrow there, but Lion didn't know that.
Rabbit hid inside his burrow until the fire went out.
Lion was amazed when Rabbit emerged from the ashes.
"You can do it too," said Rabbit. "You just need a bigger ant-hill," and he led Lion to a huge ant-hill. "Stay here; I'll build the fire."
Lion had nowhere to hide. His tail burned. Then his beard. Lion finally burned to death.
Rabbit just laughed.
[an Ila story from Zambia]
Inspired by: "Hare Deceives Lion and Burns Him to Death" in The Ila-Speaking Peoples Of Northern Rhodesia, Volume 2 by Edwin Smith and Andrew Murray Dale, 1920.
Notes: You can read the original story online. In the original story, Rabbit has some leaves that he pretends are medicine against fire, but I could not squeeze that part in. He also tells Lion that he must stay quiet for the medicine to work, so Lion doesn't even dare scream when the fire gets close. 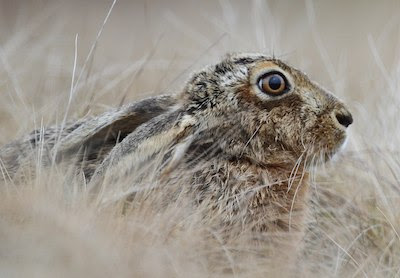