91. The Tortoise, the Elephant, and the Hippo

Tortoise told Elephant, “I can pull you out of the forest.”
Then he went to Hippo. “I can pull you out of the water.”
Tortoise came back with a rope that he tied to each one. “Pull when I say pull!”
So Elephant and Hippo pulled against each other while Tortoise laughed.
When Elephant and Hippo collapsed in exhaustion, they crawled along the rope to ask Tortoise how he possessed such strength.
“It’s you!” Elephant shouted.
“It’s you!” Hippo shouted.
Furious at being tricked, they vowed to kill Tortoise.
Now Tortoise hides from Hippo and Elephant whenever he sees them.
[a story from Liberia]
Inspired by: "Elephant, Hippopotamus, and Tortoise" in Missionary Story Sketches: Folklore from Africa by Alexander Priestley Camphor, 1909.
Notes: You can read the original story online. This is a widely known story type; in this Igbo version from Nigeria, Tortoise kills elephant and hippo in the end. Compare this version with rabbit instead: The Hare, the Elephant, and the Hippopotamus. 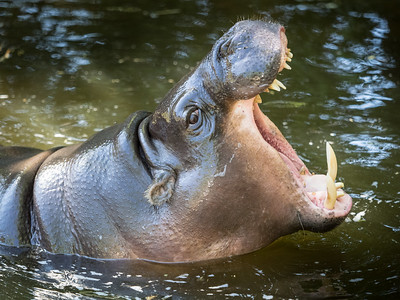