179. The Woman and the Mysterious Bird

A woman weeding her fields noticed a strange bird.
“Come!” it said. “I’ll feed you.”
The bird led her to a granary; she filled her basket, but when she returned for more, the granary was gone.
The next day, she saw the bird again. “Follow me!” it said, flying away. She followed the sound of its chirping until she reached a great plain.
There she saw a handsome man.
“I am the bird,” he said. “Marry me!”
“I don’t believe you,” she replied, laughing.
He turned back into a bird and led her home.
She never saw the bird again.
[a Nandi story from Kenya]
Inspired by: "The Tapkos Bird and the Child" in The Nandi, their language and folk-lore by Alfred C. Hollis, 1909.
Notes: You can read the original story online. Hollis recorded other stories about eleusine grain, or millet; you can find out more at Wikipedia.
The story is about a "tapkos bird" but Hollis does not provide any note or explanation for the use of this word. If anyone has any insight, let me know! Since I don't know what kind of bird the storyteller referred to, I'm including a picture of a dramatic-looking hornbill that does live in Kenya: 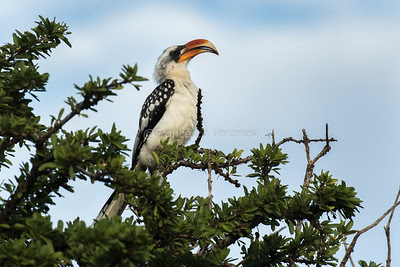