A man and his son went hunting. The man killed no animals, so he killed his son, bundled up the flesh, and went home.
A bird sang, "Hunter hunted his son, his son!"
The man stoned the bird and burned it in a fire.
But when he reached the village, there was the same bird again, singing the same song. "Hunter hunted his son, his son!"
"No!" he shouted. "Our son went with meat to his grandmother," but when the grandmother said the boy never arrived, the man confessed.
His wife left him, and the man soon died, all alone.
[a Lozi story from Zambia]
Inspired by: "Singalamba"  in Barotseland: eight years among the Barotse by D. W. Stirke, 1922.
Notes: You can read the original story online. The "tell-tale bird" is a widespread motif; often it is about betrayal between brothers, unlike this father-and-son version. Barotseland is in what is now Zambia, so for the bird I chose a picture of a turaco, which is one of the birds of Zambia. 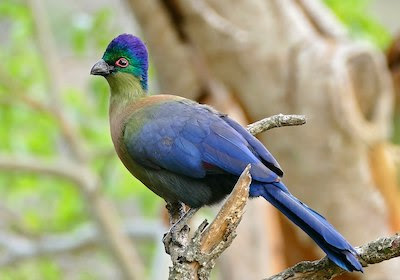