God sent a bird to tell the people that they need not die; when they grew old, they could shed their skins and become young again. "Tell this secret only to the humans," God said. "Not to anyone else!"
As the bird flew along, it saw a snake eating a dead animal.
"Let me eat too," the bird said, "and I'll tell you a secret."
"Agreed!" said the snake.
"When people grow old, they will die," said the bird, "but you can shed your skin and become young again."
That is why people die, but snakes can change their skin.
[an Oromo story from Kenya]
Inspired by: "God's Message of Life" in Two Galla Legends (published in Man) by Alice Werner, 1913.
Notes: You can read the original story online. This story comes from the chief of the Barareta Oromo (Galla) at Kurawa, north of Malindi in Kenya. You can read more about the Oromo people at Wikipedia. The author notes about the bird: "The bird Holawaka (“ the sheep of God ’’—from its cry, which resembles the bleating of a sheep) is called by the Wagiryama Kwalala; it is  said to be black (or dark blue ?) with a white patch on each wing and a crest on its  head. It is usually seen alone, sitting on the tops of trees and uttering its wailing cry." Here is what the original story says about the bird's strange cry: "God laid a curse on the bird, which is now afflicted with chronic constipation, and in its never-ceasing pain and distress sits in the treetops moaning and wailing: Wakati-a-a, My God!" It's not clear just what species of bird this is, but the story says God gave the bird a crest as a badge of honor, so here is a crested shrike which lives in eastern Africa. 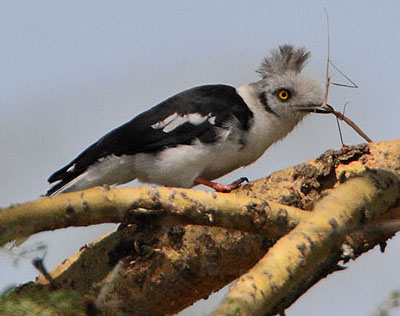