Frog and Chicken lived together.
Each morning, Chicken would tell Frog, "It's your job to go gather firewood."
But Frog didn't gather firewood. Instead, he sat in the sun and thought to himself, "It's so nice and warm. We don't need firewood."
Then, when it got dark, Chicken would have to gather the firewood herself.
This happened day after day after day.
Frog never gathered firewood.
Frog never did any work.
Finally one day a Hawk swooped down and grabbed Frog.
"Help, Chicken!" yelled Frog.
But Chicken didn't help.
She was glad.
Now she had the house all to herself.
[a Hausa story from northern Nigeria]
Inspired by: "The Lazy Frog and his Punishment" in Hausa Superstitions and Customs  by A. J. N. Tremearne, 1913.
Notes: You can read the original story online. Tremearne's note has some great variations on the story too, including one where Frog threatens Chicken, saying that he will call the wildcat if she doesn't let him in the house. There's also a variation with a lazy frog and a monkey (no hawk). 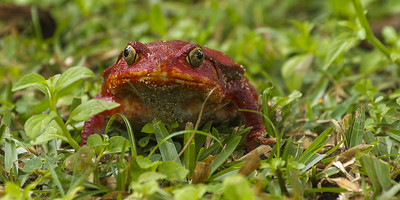