Lion died, so the animals needed to choose a new king.
Some wanted Fox, others Hyena.
Finally, Hyena's supporters prevailed.
"But Hyena stinks!" protested Fox. "You can't elect a king who feasts on corpses."
"I''ll just sniff the corpses from a distance," Hyena vowed. "No more eating corpses, I swear."
So the animals put Hyena on the king's throne.
Then Fox found a putrid corpse and threw it at the foot of the throne.
King Hyena sniffed, and sniffed... and then the king pounced on the corpse and began eating.
The animals rejected Hyena and made Fox their king instead.
[a Bishari story from the northern Sudan]
Inspired by: "When the Lion Died" in Northern Sudan: Bisharin Fables by W. E. Jennings-Bramly, 1925.
Notes: You can read the original story online. You can read about the Bishari people of northeast Africa at Wikipedia.Compare this story: The Hyena and the Prophet. 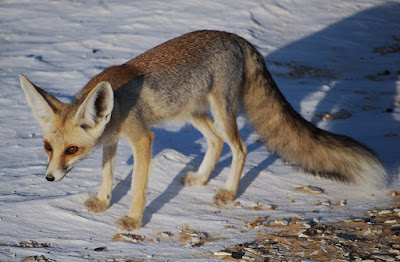