155. The Sparrow and the Monkey

Monkey and Sparrow were friends.
"Let's go drink palm-wine!" said Monkey.
"No!" said Sparrow. "That's dangerous."
But Monkey insisted, so Sparrow finally agreed, and together they went into the forest, tapped a wine-palm, and drank the wine.
The two friends drank so much palm-wine that they became drunk.
The drunken Sparrow began chattering loudly, and then all the birds started chattering.
A hunter heard the noise and came to investigate. He saw Monkey, aimed, and fired. The birds all fluttered away safely, but the shot hit Monkey and killed him.
Thus Sparrow escaped, while Monkey died because of his foolishness.
[a Bulu story from Cameroon]
Inspired by: "How Monkey Destroyed Himself" in Bulu Folk-Tales (in Journal of American Folklore) by George Schwab, 1914. The Bulu are a people who live in Cameroon. The monkey is "mvon," a colobus monkey.
Notes: You can read the original story online. 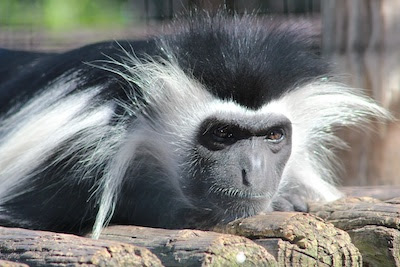