169. The Wives Who Quarreled

Two wives were quarreling.
A child approached the women and said, "Why are you quarreling? Wives should live together in peace."
"Go away!" shouted one.
"Or else we'll kill you!" shouted the other.
"But people should love one another," said the child.
Then they killed the child.
When the mother saw her child lying there, she said, "Wake up, my child," thinking the child was asleep.
A bird flew by and said, "The child is dead, not sleeping. Those two women killed your child!"
When the women heard the bird say this, they ran away and never came home again.
[a Duala story from Cameroon]
Inspired by: "The Two Women" in Duala Fables (published in Journal of the African Society) by Wilhelm Lederbogen, 1905.
Notes: You can read the original story online. This is a story from Cameroon. The motif of the bird who reveals a hidden crime, especially murder, is a widespread story motif in Africa. The story did not say what kind of bird, so I chose a turaco, which is a bird found in Cameroon: 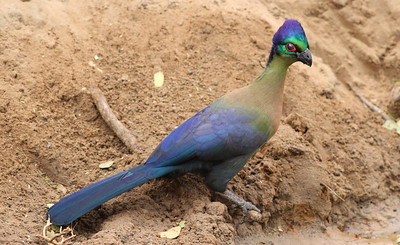