73. The Hunter and the Leopard

A hunter saw Leopard in a trap.
“Help!” Leopard shouted.
The hunter freed Leopard.
Then Leopard snarled, “I’m starving! Give me your dog.”
Terrified, he gave Leopard his dog.
Leopard ate the dog. “I’m still hungry!”
The hunter gave Leopard his cartridge-case.
Leopard ate the cartridge-case. “I’m still hungry!” he said. “Now I’ll eat you.”
“Help!” the hunter shouted.
Rabbit came running. “What are you arguing about?” he asked.
“I found Leopard in a trap…” the hunter began.
“Don’t tell me,” Rabbit interrupted. “Show me!”
Leopard got back in the trap.
Then Rabbit told the hunter, “This time: shoot him.”
[an Ambundu story from Angola]
Inspired by: "Nianga Dia Ngenga and Leopard" in Folktales of Angola by Heli Chatelain, 1894.
Notes: You can read the original story online. The Kimbundu text is also available. The story has Leopard stuck in the fork of a tree because Elephant put him there; that was complicated to explain, so I just said Leopard was in a trap. For a different outcome, see The Grateful Python. 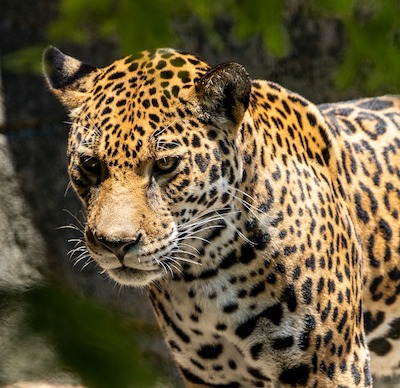