185. The Woman and the Crocodile

An old woman was crossing a stream when a crocodile grabbed her. He carried her to his hole in the riverbank, and stuffed her inside the hole; the old woman pretended to be dead. Then the crocodile swam away, leaving the corpse to ripen.
As it happened, two bulls were fighting just above the crocodile's den. As they stamped the ground, one bull's foot broke through into the den. The woman grabbed the foot, and the bull pulled her back out into the daylight.
To honor the bull, she vowed that she and her descendants would never eat beef again.
[a story from Madagascar]
Inspired by: "The Woman and the Crocodile" in Oratory, Songs, Legends, and Folktales of the Malagasy (published in Folklore) by James Sibree, Jr., 1883.
Notes: You can read the original story online. The author comments: "there certainly were people to the eastward among the Bézánozàno who abstained from beef; and it is said there are still those who do so up to the present day." 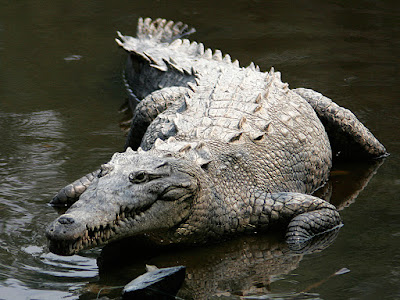