97. The Tortoise and the Leopard

“My powers are so great that if you bury me in a grave, I will rise again!” Tortoise boasted. “Nothing can stop me!”
Leopard didn’t believe Tortoise, so he dug a very deep pit into which he threw Tortoise and then buried him. Leopard was sure he’d never see Tortoise again.
But Tortoise’s friend Rat came and dug a hole so Tortoise could escape.
At first Leopard was surprised to see Tortoise, but then he said, “You’re not so great! I can rise again like you!”
So Tortoise dug a pit and buried Leopard.
That was the end of Leopard.
[a Bulu story from Cameroon]
Inspired by: "The Tortoise and the Leopard" in Bulu Tales from Kamerun, West Africa (published in Journal of American Folkklore) by Adolph N. Krug, 1912
Notes: You can read the original story online. In the original story, people come and rescue Leopard in the end, but I decided to let him die there in the ground. 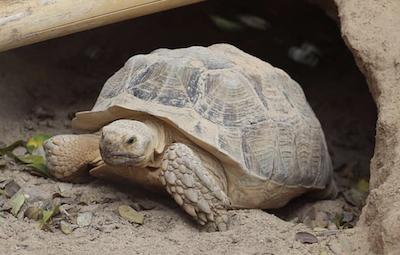